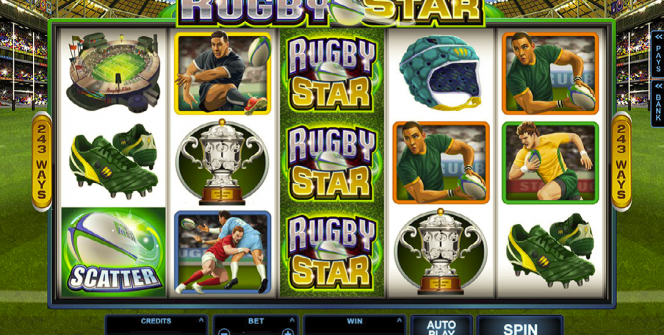 Microgaming’s New Rugby Star Slot Is Well Worth A Try

Online casinos are always looking for conversions, well thanks to the superb new Rugby Star Slot from Microgaming, all they need to do is ‘try’ a little harder and they’ll be attracting a stadium full of new customers in no time!

This exciting new slot is based on the sport of Rugby and has been released just in time for the build up to the forthcoming Rugby World Cup, which will certainly be one of the biggest topics of conversation in the latter half of 2015.

A rundown of the basics shows that Rugby Star is a 5×3 reel slot that boasts 243 paylines available on every spin and comes with a highly accessible minimum bet of just 0.50 per spin. At that price, this is a game that will appeal to the lower stakes punter, though those who prefer to wager more on a spin can scale up their bet considerably.

The slot comes packed with features. In the base game you have the usual scatter symbol on the reels, but the Wilds are Stacked across reels 3, 4 and 5 with the chance of landing a stack of up to 40 symbols in one string.

One exciting Base Game features is the Wild Pass feature which triggers randomly in the game and turns up to two of the middle three reels completely Wild. The great news is that any winning line in the base game, or test spins triggers Rolling Reels, which sees the winning reels explode and the other symbols roll down the screen to create potentially more winning lines.

Speaking of test spins, land 3, 4 or 5 scatters across the reels and you will receive 15, 20 or 25 test spins respectively, complete with a Multiplier Trial which can see your eventual pay out increased by as much as 10x the original win.

With Rugby symbols packed on the reels, a typically robust soundtrack and the chance to win up to 120,000 coins, the Rugby Star Slot could be your ticket to a World Cup sized win this autumn at E Online Casino Reviews.